One of the first rumours to appear following Claudio Ranieri’s appointment at Fulham was his interest in a reunion with Watford’s Stefano Okaka, whom he managed during their time together at Roma.

This suggested the Italian wasn’t fully pleased with the goalscoring talent at his disposal beyond Alexandar Mitrovic, who has been a reliable outlet for the Cottagers since his initial loan from Newcastle.

Slowly but surely, the Okaka story seemed to disappear, but that doesn’t mean Fulham are done with their striker hunt, as recent stories suggest the London side have turned their attention to Roma’s Grégoire Defrel.

The French forward is currently on loan at Sampdoria for the season, but Thursday’s edition of Gazzetta dello Sport suggest a transfer could be sorted in January either way, cancelling the last six months of the forward’s time in Genoa if both sides come to an agreement. 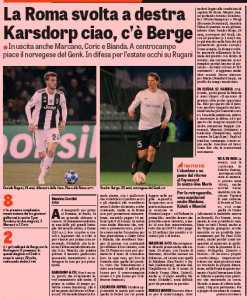 The Italian newspaper explain that, as things stand, Fulham are ‘in the lead’ when it comes to Premier League sides, and a sale would allow Roma to reinvest the money in a new player as long as they don’t make a loss.

Considering the initial deal taking him from Sassuolo was around €20m altogether (loan and redemption), that might be a tough ask as the 27-year-old has hardly been in mind-blowing form this season, scoring a goal every three games (six in 18) in the league so far.