We know you’re probably all really, really, and we mean REALLY bored of the whole Aaron Ramsey leaving in the summer story, but now you know how Liverpool fans felt about Emre Can doing the exact same thing last year.

It’s been made clear the Arsenal midfielder would not be renewing his contract at the Emirates going forward, and since we’re now past January 1st, any club in Europe can present the Welshman with a contract, which Gazzetta dello Sport explain is exactly what Juventus have done.

Fabio Paratici, their director of football, made it very clear recently the Serie A side are keeping an eye on the situation, but the Italian newspaper believe they’ve gone a step further now, handing Ramsey a five-year deal worth up to €7m/year post tax. 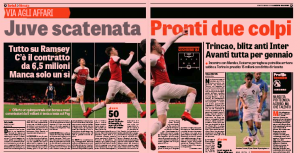 Furthermore, Ramsey would receive a €9m signing on fee.

Down his end, the Arsenal midfielder and his entourage have received the offer ‘with great interest’, leaving Juventus ‘in the lead’, ahead of the likes of Inter and Paris Saint-Germain.

We hope you’re strapped in and you went to the toilet before we left, because this is going to be a long trip.

Everton have attacker ‘on their list’ – In top form, club won’t sell for €25m

Everton have attacker ‘on their list’ – In top form, club...

“We’re sad about it” – Manchester City player on difficult period,...