On December 6th, we carried a report from Mundo Deportivo, who claimed Maurizio Sarri has told Chelsea to sign Denis Suarez in January after having failed to sign the Barcelona midfielder for Napoli.

A week later, Marca reported that Arsenal are also interested in the Spaniard and it was mentioned the Gunners are in pole position for the 24-year-old.

Thursday’s edition of Catalan newspaper Sport expects the former Villarreal man to leave the Camp Nou in the winter market and believe the La Liga winners may receive offers in the coming days.

Having failed to start a single match in the league and the Champions League, he’s lost prominence as Ernesto Valverde prefers other players ahead of him. Suarez has 18 months left on his contract and has a release clause of €50m.

The report explains the Blues and the north London club, along with AC Milan and Marseille, are all interested in the player.

It’s also claimed the Blaugrana are ready to reach an agreement with a potential suitor in order to help Suarez get a transfer.

Milan are looking for a loan deal with a view to buy, while Chelsea and Arsenal are ‘willing to close’ the transfer. 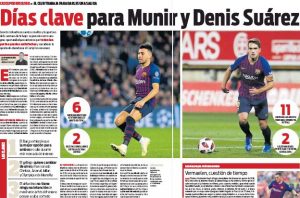 It is clear that the two English sides have an advantage over other clubs and it may come down to a battle between the west London club and the Emirates outfit for Suarez’s signature.