The ‘derby’ between Liverpool and Manchester United this weekend is receiving lots of coverage around the European football media. Probably more so than Sunday’s Milan derby, and certainly more than Barcelona travelling to Atletico Madrid this evening.

Various European media seem to have their own angle of interest, what the game will mean from their perspective, and for L’Equipe it’s all about Anthony Martial.

Having a much better start to the season, the French newspaper believe Martial has made himself Manchester United’s super-sub, following in a long line of similarly dubbed players.

Whilst Martial would much rather be a super-starter, some in France believe the tough love dished out by Jose Mourinho has been part of a plan, rather than just a random nastiness issue. 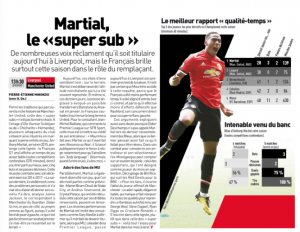 Jean-Michel Badiane, a pundit for French TV, is quoted as explaining: “Mourinho did with Martial what he had done with Benzema at Real: publicly to force him to react, especially to improve his body language. Now, when it comes to playing, he has teeth.”

Saturday’s match against Liverpool has the ability to be pivotal for Martial, and a winning goal would surely help cement his great start to the season further. The subsequent coverage would also give Didier Deschamps a nudge over national selection.