Home Europe Five-year deal waiting for 19-year-old at Tottenham, ‘larger wages than anything’ he...
SHARE

As the weeks go by, the Italian media are getting hold of more and more detail regarding Tottenham’s alleged interest in Roma’s Nicolo Zaniolo.

The youngster has yet to sign a new contract with the Serie A side as both parties cannot find an agreement, and while it’s clear he would like to remain in Italy for the near future if he can, that might not be an option for him for long.

Juventus are said to be interested, as they always are when it comes to young local talent, yet there would be little guarantee of him starting in that star studded team, while Mauricio Pochettino could be more inclined to give him a chance in London.

Nothing has happened so far, but Corriere dello Sport on Sunday reiterate that Spurs have €50m or so ready to spend on Zaniolo if they so wish. 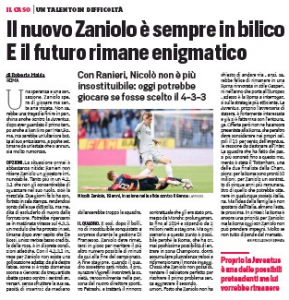 This isn’t new, as we’ve already covered it in the past, but the article also mentions the youngster has a five-year contract waiting for him in England’s capital, which includes wages ‘larger than anything he would be able to get from Italian clubs’.

Quite the enticing proposal, if you ask us, and a lot could depend on where Roma finish in Serie A this season.

They currently sit sixth, one point behind fourth with two games to go.