Fotomac report Fenerbahce have reignited their interest to sign Luciano Narsingh from Swansea City as the Dutch winger will become a free agent at the end of the season.

The 28-year old was linked with a move to Fenerbahce last summer when Phillip Cocu was in charge at the club. It was claimed in the Turkish press Cocu wanted a reunion after working with Narsingh at PSV prior to his move to Swansea City.

With the Swans set to spend another season in the Championship, Fotomac report Narsingh is likely to leave the Liberty Stadium and Fenerbahce manager Ersun Yanal has given the green light to sign the player.

Fenerbahce sporting director Damien Comolli is reported to be in talks to sign the Swansea City man and he’s hoping he can sign the Dutchman before preseason starts. 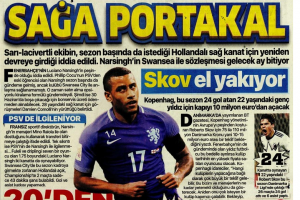 The 28 year old hasn’t managed to claim a regular starting spot under Graham Potter and he’s only made two appearances for the Championship side this season.