Fiorentina are ready to turn Patrick Cutrone’s loan move from Wolverhampton Wanderers into a permanent deal this summer.

That’s according to Corriere dello Sport, who say the Italian club are keen to keep the striker beyond the summer.

Cutrone joined Wolves in a £16m deal last summer but his time at the club proved to be a disastrous one, with him struggling to settle in England.

He headed back to Italy in January, securing a loan deal with Fiorentina in an attempt to get his career back on track.

He’s proven to be a hit with the club, despite only managing one goal and assist in nine games so far, and they are now looking to turn his deal into a permanent one.

Corriere explain that they view Cutrone as an indispensable member of their team, alongside Federico Chiesa and Gaetano Castrovilli and want to lock him down for the future. 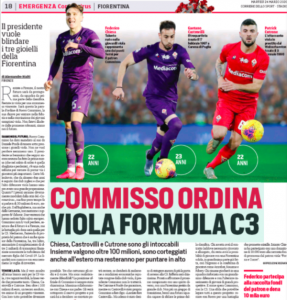 They believe with those three ‘everything could become possible’ and director of football Daniele Pradé is working on getting a permanent deal done for the Wolves man.

There is no mention of a fee at this point, although it’s easy to imagine Wolves will look to at least recoup what they paid last summer.

That would represent a good outcome for them on a deal that hasn’t worked out for anyone involved.