Friday will go down in transfer history as one of the most dramatic days of a window.

In the morning it was widely thought Cristiano Ronaldo would be leaving Juventus for a move to Manchester City, and then in the afternoon Manchester United announced they’d agreed a deal for the player’s arrival.

Ole Gunnar Solskjaer may not be finished in the transfer market, with AS reporting a late return for Kieran Trippier is a distinct possibility. Arsenal are also keen on the Atletico Madrid player, however, it’s Manchester United who are ‘above all’ leading the chase.

The Spanish newspaper talks of a ‘final rush’ from the Premier League for their players, with Trippier and Saul Niguez mentioned. A move to Old Trafford for the midfielder is ‘almost ruled out’, with it thought that a move to Chelsea is likelier in the final days of the window. 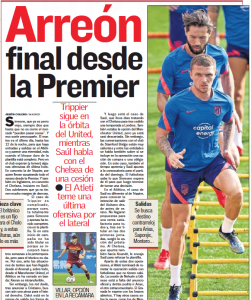 Regarding the defender, Manchester United are said to be considering a late offer, but Atletico are determined to keep their player or sell him for an above market price.

That would be €40m, and it remains to be seen whether the English club will try and test the resolve of Los Rojiblancos.