Back in early January, the Times claimed Chelsea were looking at both Maurizio Sarri and Diego Simeone as potential replacements for Antonio Conte come the end of the season, and that got Napoli worried.

From Friday until the 31st of May, the Serie A manager has a release clause in his contract that allows him to leave the club if someone pays the Aurelio de Laurentiis €8m.

Il Mattino explain, using the Times’ article as reference, that Roman Abramovich ‘wouldn’t have a problem’ paying that amount if that meant ensuring success returns to Stamford Bridge. 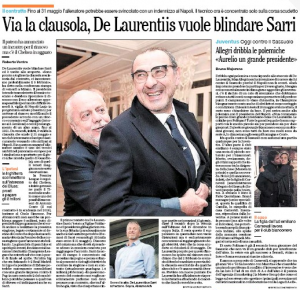 Sarri’s style of play with Napoli has been compared to Pep Guardiola’s at Manchester City, and with both teams currently top of their respective leagues, it’s understandable to see a Premier League side keen on his services.

This is why De Laurentiis is keen to get his manager to sign a new contract, one that would see the release clause taken away, and would keep him at the club a year longer.

Announcing talks on that subject would start from February 9th onwards, Chelsea, were they very keen on Sarri, have a short window to manoeuvre in.

It seems unlikely, but with Antonio Conte revealing he isn’t exactly happy at Stamford Bridge, who knows what could happen in the coming month or so.