It’s fair to say that Massadio Haïdara’s time at Newcastle United hasn’t been a happy one. L’Equipe report in their Sunday edition that an exit is close, and explain the player’s terrible injury record over recent years.

According to the French newspaper it all dates back to a poor tackle from Callum McManaman, who was playing for Wigan Athletic, in March 2013.

Saint-Etienne are seriously considering signing the player, and they’re working on a complicated deal with Newcastle United. With Haïdara out of Rafael Benitez’s plans at St James’ Park, the club are willing to release him from his contract for nothing.

The main condition of this is a clause entitling Newcastle to 50% of any further fee Saint-Etienne receive for the player. Nothing will be signed until ‘in-depth medical examinations’ 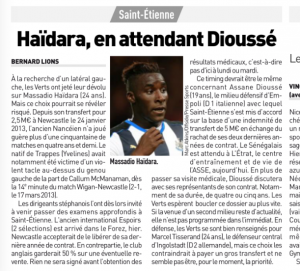 are complete, and that’s expected to happen by Monday or Tuesday, meaning the Newcastle transfer could be announced around midweek.

It sounds like a fair situation for all involved. Saint-Etienne get a chance of a good signing, Haïdara gets the chance to rebuild his career, and Newcastle have the carrot of 50% of a future fee for a player who only has a year of contract left.