Both in need of a winger this summer, Manchester City and Manchester United have approached the problem very differently.

As soon as they were granted permission to take part in next season’s Champions League, Pep Guardiola’s side sprang into action (after letting Leroy Sané go to Bayern Munich) and signed Ferran Torres from Valencia.

Across town, Ole Gunnar Solskjaer and Ed Woodward have yet to confirm an official signing, seemingly doing their best to acquire Jadon Sancho from Borussia Dortmund.

That will take a while, such is the amount of money involved in a deal for the England international, and there will be some other names being looked at, just in case it never materialises.

Players like Federico Chiesa have been suggested, mostly by the Italian media, but Manchester United have also been made aware of Facundo Pellistri through none other than one of their former players, Diego Forlán.

Currently the manager at Peñarol in Uruguay, the former striker, according to L’Equipe, ‘has spoken’ about the 18-year-old to an ‘emissary’ of the Red Devils. 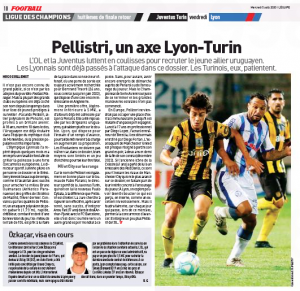 The problem is there’s a lot of interest in the right-winger, including from Manchester City, who have ‘advanced the most’ in the affair, having made their ‘concrete interest known to the player’s entourage’.

But, and it’s a big one, Lyon in France are also determined to sign Pellistri, and a first bid of €5m has been made and been rejected, since Peñarol want around double.

It’s explained Juninho Pernambucano and his colleagues could return soon, and there’s ‘no time to waste’ because an auction ‘could prove fatal’ to the Ligue 1 club.

Such is the level of competition involved, as joining Manchester City and Manchester United are also Juventus, although they appear to be taking their time for now.

Tick, tock… and all that.