Watford have started the 2018/19 season on a brighter note by winning their first three matches and they now have the same number of points as leaders Liverpool, Tottenham Hotspur and Chelsea.

Before the start of this campaign, the Hornets were considered by many to be ahead of a relegation fight.

It was even reported that their manager, Javi Gracia, could be the first coach to be shown the exit door, and the Spaniard is delighted to have changed the prediction after winning all their league fixtures so far.

“I have no complaint [with our start], really. And less with this beginning of the season, so… You see everything looks better,” Gracia told Spanish newspaper AS.

“They had me as the first sacking among the 20 Premier League coaches. But now we have changed the statistics slightly.”

The former Malaga boss took charge of the English club in January 2018, replacing Marco Silva. He helped his side finish in 14th position last term with 41 points, eight points ahead of relegated side, Swansea City.

Gracia explained it was important for him to get rid of the negativity when he arrived at Watford and also explained the importance of having a good pre-season on their impressive start to the season. 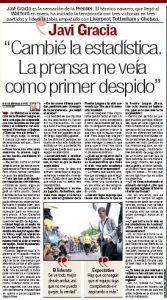 “…we were together last year, and the pre-season has helped us all to get to know each other and prepare things. Last year was rather going from week to week, trying to stop the negative dynamics, with a situation of quite unstable in terms of a few available players,” he added.

Gracia is now getting things together the way he wants them and it’s been showing on the pitch. This good start to the season could be crucial in dictating how the momentum goes for Watford as the campaign continues.