Today’s edition of Sport now claim the Colombian international’s transfer is now ‘closer’ and his next destination will be in the Premier League as the Red Devils have taken the lead, but a move to Everton is still not ruled out.

The 20-time English champions’ delegation has already travelled to Barcelona to negotiate and formalise the offer for the centre-back. ‘Everything indicates’ Mina, who was the star player for his national side at the 2018 World Cup, will play under Jose Mourinho next season.

Ernesto Valverde’s side are demanding €40m for the former Palmeiras man and the figure proposed by the Premier League club is not close to Barcelona’s asking price. However, there is hope an agreement between the club can be reached. 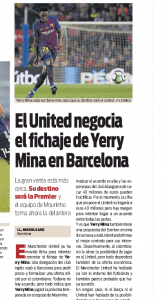 Everton are also interested, but the opportunity to play for the Red Devils is tempting for Mina, although the 23 year old’s agent will still assess the economic offers. Mina is said to be ‘increasingly aware’ his ‘destiny will be United’.

With the transfer window closing in less than a week, Manchester United will now need to hurry to get Jose Mourinho the additions he wants.