Portuguese newspaper Record features today a big story about Jean-Clair Todibo. The defender is said to be ‘on top of the list’ of signings which Benfica plan to make this summer.

The 20-year-old spent last season on loan at Schalke 04, and has since returned to Barcelona, with whom he has a contract until 2023.

Record says Benfica won’t have an easy task to sign the player, since there’s a big competition from the likes of Everton, Fenerbahçe and Wolverhampton Wanderers.

The newspaper writes that it was first the Toffees and Wolves who made their approaches asking for the conditions for the signing. Then the Turkish side joined the race.

Even though the Eagles have been following him since January, they’re still to make a move.

The report claims the Todibo isn’t staying at Barcelona due to the big fight for a place in the team. 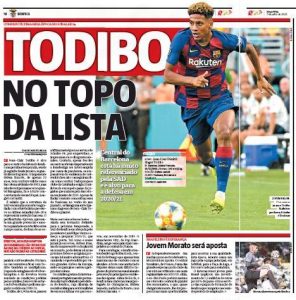 However, there’s no information on how much he’d cost. All they say is that the Catalan side demanded €25m for Schalke 04 to keep him, and that’s why the Bundesliga side gave up on the signing.

If that is all they are asking for, then Everton and Wolves shouldn’t have too much of a problem meeting that.

First, however, they’ll probably want to finish the Premier League campaign before delving into the complicated and frustrating world of making offers for players.