It seems that Yacine Brahimi may finally get what he always wanted. The Porto winger has been linked with Premier League moves for years now, but he and his former agent François Gill never managed to get a deal over the line.

Last summer Brahimi was on the verge of a move to Everton for several weeks but Ronald Koeman didn’t get his man in the end. Slaven Bilic targeted Brahimi as well and it’ll be no shock to see both clubs return with the interest.

Now, according to Portuguese newspaper Record, Brahimi has changed his agents and accepted an invitation from Stellar Group, a company managed by the representative Jonathan Barnett. 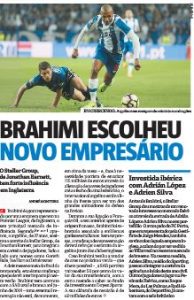 Stellar do some big work in the Premier League, and have clients such as Gareth Bale, Adam Lallana and Joe Hart.

That’s why Record considers the chances of Brahimi moving to the England are much bigger. They believe a Porto departure in the summer ‘very possible’.

Many Premier League clubs have been linked with Brahimi but Everton and West Ham are two of the most recent. As the Hammers are said to have been interested for a long time, the Toffees even bid for him last summer.

Brahimi’s release clause is €50m. Although we find it very difficult for Porto to ask for such amount, they can’t really sell him for a very low price, since they only own 50% of the player’s rights.