With a contract running out in the summer, and no sign of Manchester City offering him a new deal in the coming months, Bacary Sagna is currently free to talk to clubs about a contract for next summer onwards.

This, and the fact he is still an active part of Pep Guardiola’s squad, means a few clubs have started sniffing around at the opportunity of picking up a very experienced defender for nothing, including Marseille in France. 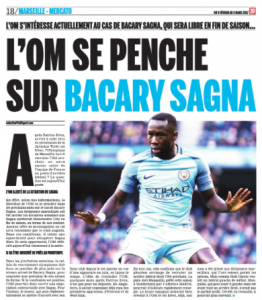 While the Ligue 1 side would offer him the opportunity to return to France, a country he left in 2007 to join Arsenal, Le10 Sport claim he will also be of interest to a couple of Premier League sides.

The French magazine claim in their monthly edition that both West Ham and Everton have already made a few approaches regarding a potential deal in the summer.

Remaining in the Premier League could certainly be an interest prospect, especially at 34, and with Ronald Koeman and Slaven Bilic two managers at the helm of relatively strong clubs, the opportunity might be too good to refuse.

An ideal replacement for a likely departing Alvaro Arbeloa at West Ham, or much needed backup for Seamus Coleman at Everton, both sides could do a lot worse than bringing in Sagna to the London Stadium or Goodison Park respectively.