Home Europe Everton target ‘may ask to be sold’ in summer – Ancelotti ‘would...
SHARE

It remains to be seen whether Everton are actually interested in Alex Meret should they decide to get rid of Jordan Pickford, but certain members of the Italian media are adamant the Toffees are hovering.

Others are a bit surprised at the rumours, with one journalist claiming Carlo Ancelotti isn’t actually that big of a fan of the young goalkeeper, but for the most part, from the main newspapers, the belief is a transfer could take place if the stars align.

Thursday’s edition of Gazzetta dello Sport is no different, as they look at the goalkeeping situation at Napoli these days, explaining that Meret’s ambitions go beyond playing a rotation game with David Ospina, as he can ‘only cultivate them by playing as a starter’.

Gennaro Gattuso’s likely exit come the end of the campaign could sort that out for him, as the new manager will be asked by Aurelio De Laurentiis to focus on the 24-year-old instead of his Colombian teammate, but if that doesn’t happen, the player ‘may ask to be sold’. 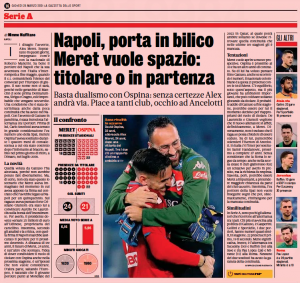 Were that to happen, it’s explicitly stated that ‘Ancelotti’s Everton would gladly bet on him’, as would the likes of Inter, who eventually need to replace Samir Handanovic, and AS Roma.

A lot rests on the upcoming managerial decision in the south of Italy, but there could be an opening for the Toffees if matters go their way.