Stuttgart chief Sven Mislintat has again hinted it is unlikely that Arsenal defender Konstantinos Mavropanos will stay with the club next season.

The Greek centre back has been with the German side since the summer, when he was shipped out by Arsenal in search of regular playing time.

After a rocky first half of the season due to injuries, he’s found that with Stuttgart, establishing himself as a regular in their defence and key player with several impressive performances.

His loan deal expires in the summer, and so far, there have been mixed messages about whether there will be an extension come the end of the season.

Mavropanos has admitted he could see himself staying for another year, but Mislintat has regularly poured cold water on the notion, insisting the decision will rest firmly with Arsenal.

That’s a line he’s continued on today, stating it’s unrealistic to think the club have a better chance of signing him permanently after his loan spell. 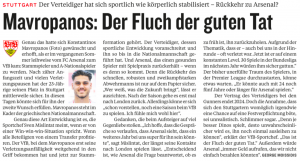 “The decisive factor is how Arsenal answer the question of whether it is too early to bring him back,” Kicker report him saying.

“Because of the fact that he was often injured – even with us in the first round. Now he’s at a consistent level.

“Thirty games in the Bundesliga next year would certainly do him good. He could still play for Arsenal for five years or more at the age of 24.

“The better Dino plays, the less likely it is that he can be loaned out again. (Arsenal would) always call for money that we couldn’t just pay.”