After struggling to impress in his first six months at Everton, Sandro Ramirez joined Sevilla on loan until the end of the season.

The Spanish club already had the services of Wissam Ben Yedder and Luis Muriel. Sandro joined the list of the attackers in January, but wasn’t able to solve Sevilla’s goalscoring record.

The club scored 48 goals in the league, while they conceded 10 more than that. Ben Yedder and Muriel collectively scored 15 goals, while Sandro has failed to score so far in La Liga at all, or in any other competition since returning to Spain.

According to the Spanish newspaper Marca, Sevilla are still looking at the option of adding Sandro to their squad for next season. The La Liga outfit now have to negotiate with Everton to see if they are ready to allow him leave this summer. 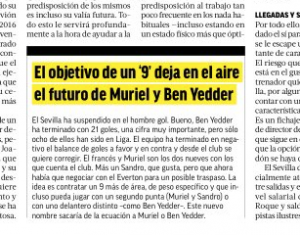 This is mainly because Sevilla want to sign a new ‘number nine’ who can play as a lone striker or with a second striker behind him. They want regular goals and despite Sandro not providing those so far, he’s still a candidate.

Now it’s time for the Everton talks, and for Sevilla to dream up a figure, take 50% off, and then offer to pay that at the end of another loan.