Everton director of football Marcel Brands has hailed rivals Liverpool, labelling them the ‘perfect example’ of how to achieve success.

The Reds are currently on one of their most successful runs of the past 30 years, having fully transformed under Jürgen Klopp’s leadership.

Last summer saw them win the Champions League for the sixth time, as well as finishing second in one of the most hotly contested Premier League title races ever.

They’ve now carried that form into this year and currently sit top of the Premier League with a 22 point lead over Manchester City.

Indeed, two more wins will be enough to ensure their first league title in 30 years and add to their growing success under Klopp’s leadership.

Their success has not been overnight, though, and that is something Everton’s Brands believes others should take note of.

“Liverpool have an excellent team, and for a lot of clubs it’s the perfect example of how to achieve something,” he told De Telegraaf.

“The turnaround doesn’t come about in one blow or one transfer window.

“The coach is there for the fifth season, every year the team has improved, and each time a few targeted transfers have been made.

“Those three in front are almost unstoppable. With Gini, Liverpool has the most stable midfielder there is, Virgil van Dijk is at the back and with the arrival of a top goalie – the last point they could improve on – they have a great axis.” 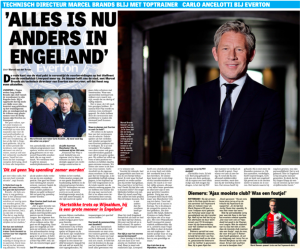 Wijnaldum, of course, is no stranger to Marcel Brands, given he signed the midfielder for PSV Eindhoven, where he was director of football before his move to Everton.

The Dutchman proved to be a massive hit at the club, making 154 appearances and scoring 56 goals for them before moving to Newcastle in 2015 for £14.5m.

He is often held up as one of the success stories of Brands’ career to date, and he admits it’s something that makes him ‘proud’.

“I got Gini very young, and he was an expensive purchase,” he added.

“If I was allowed to contribute a very small part to something, it is that at PSV that number 10 story has been put out of his head.

“We were already working on that back then. I thought he should become an all-round midfielder, because then he could reach the world’s best. He reached that level.

“The last thing he could grow in was his personality. That’s what happened.

“Here in England, he has become a great gentleman. I think he will be one of the first in the starting lineup with Jürgen Klopp.”