It’s been a while since we last saw the likes of Everton and Leicester City being linked to Sporting midfielder João Palhinha, and it turns out those rumours are back in the Portuguese media today.

Record features a piece on the player and says it’s ‘nearly certain’ that he will not stay with the Lions for next season, since there are many clubs who’d like to sign him this summer.

So when speaking of interested sides, we’re back to seeing the Toffees and Foxes among those who ‘follow the midfielder’.

It’s said Sporting are unlikely to be able to stop the many European clubs from signing Palhinha, as even the player himself knows he should leave the Lisbon side very soon. 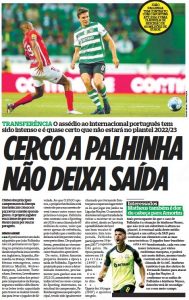 Palhinha is protected by a release clause worth €60m, and O Jogo claims ‘it’s known’ he won’t leave for something even close to that. Recent reports have been claiming that the minimum price is €25m.

Everton and Leicester City were said to be interested last summer, with their chase going quiet since then, and that’s why it’s interesting to suddenly see them included in the race once again. This time. they’re said to have competition from the likes of Atletico Madrid, Bayer Leverkusen, Paris Saint Germain, Tottenham Hotspur and Wolverhampton Wanderers.