Juventus could make a move for Everton’s Moise Kean this summer, so long as he does not end up back at Paris Saint Germain.

That’s according to Tuttosport, who say the Italian remains an option for his former club.

The newspaper explains that Juve remain keen on adding a striker to their squad this summer, despite signing Alvaro Morata last summer.

There is a belief at the club that they still need more, and so they ‘raise the antennae’ in several directions looking for possible options.

One of those antennae has been pointed in the direction of France and Paris, in particular, where Kean has been shining with PSG on loan from Everton.

He is expected to stay with the French giants, but they do not have a purchase option on him, and Leonardo has made it clear on several occasions that Everton will demand a top fee for their man. 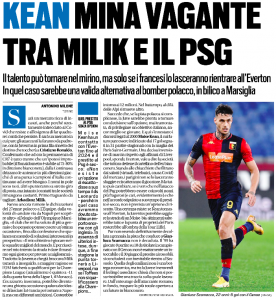 Therefore there is every possibility PSG will not be able to sign him permanently, and if that is the case, Juventus ‘could try the path’ and attempt to bring him back to the club.

Of course, this is nothing new given they were keen in the summer too but could not strike a deal with Everton, who subsequently sent the striker across the Channel instead.

That interest has not gone away; indeed it has only strengthened after this season, and if PSG can’t get him, it seems Juve will be waiting in the wings with an offer of their own.