Genk’s Mark McKenzie has been backed to complete a move to Arsenal in ‘two or three years’ by his former teammate, Oguchi Onyewu.

The 22-year-old arrived in Europe when the Jupiler Pro League side took him from Philadelphia Union in January. He has made six league appearances with Genk so far.

Onyewu’s playing career spanned over 15 years and he had spells at Standard Liège, Queens Park Rangers, Newcastle United and others. He ended his career at Philadelphia Union and retired in September 2018.

It was at the Major League Soccer side the 38-year-old, who is now the sporting director for Orlando City B side, shared the dressing room with McKenzie. The two still maintain contact and Onyewu is of the belief the Genk centre-back’s qualities and abilities can help him get a switch to the north London club in the future.

“Mark was in the second team at the time, but I saw in him as someone with a lot of potential. I took him under my wing, became a bit of his guide in professional football,” Onyewu told Het Belang van Limburg.

“When I heard that he was going to sign for Genk, I of course congratulated him. It’s a good club, not as good as Standard of course [jokes], but still quite okay. 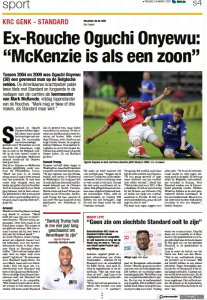 “Mark is enjoying himself at Genk. He was taken care of very well. I’m not worried about him at all. That boy is a born winner. It could be that he will be playing at Arsenal in two to three years.”

McKenzie is tied up to Genk until 2025, and he’ll have to do a lot to make the Arsenal idea come to fruition.