Everton remain keen on a move for PSV Eindhoven star Denzel Dumfries, but Marcel Brands has to sell players to finance a transfer  first.

That’s according to Voetbal International, who say the Dutch side can ‘cash in on’ Dumfries this summer after his fine performances at the European Championships.

The fullback has been one of the stars of the show for the Netherlands so far, playing a shining role in the excellent performances in the group stages of the tournament.

He’s already been heavily linked to Everton over the past few weeks, indeed before the tournament began, with other suitors such as Bayern Munich and Inter Milan added to the list as well.

VI cover those claims themselves and ‘endorse the foreign reports’ about the fullback, stating that Inter Milan ‘probably gets competition’ from AC Milan, and Bayern Munich ‘follows him with a lot of interest’.

Everton, meanwhile, are said to be ‘on the radar’, but it’s claimed that director of football Marcel Brands ‘must first sell’ before he can make his move. 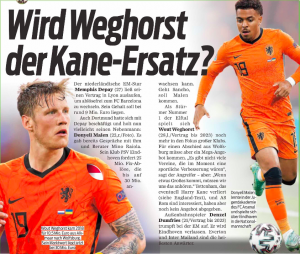 The Blues are also mentioned as being among the suitors by SportBILD, who say Dumfries will leave Eindhoven, and Everton and Inter Milan are the ‘hottest contenders’.

They make no mention of Bayern Munich, which is odd for a major German newspaper and suggests they are not really in the race.

That would be a boost for the Toffees, although it seems they are waiting to raise funds before making a proper move.