Home Europe Everton signing could be done ‘today, tomorrow or even at the weekend’...
SHARE

Everton are closing in on a €30m deal for Napoli midfielder Allan, and the move could potentially be confirmed by this weekend.

That’s according to Corriere Dello Sport, Il Mattino and Tuttosport who provide the latest update on the saga today.

The Brazilian midfielder has been edging closer to the switch to Goodison Park all this week following reports that he was ignoring interest from elsewhere as he wanted to reunite with Carlo Ancelotti.

Reports yesterday indicated that a deal was getting closer and that it could even be done within 48 hours, something that has been backed up by Corriere today.

They report that the move could be finalised ‘today, tomorrow or even at the weekend’ as the two clubs are edging closer to an agreement over the asking price

It’s explained that ‘there is not even arm wrestling anymore’ and the pair are now on the ‘threshold of mutual satisfaction’.

That’s because they’ve both moved from their negotiating points, with Napoli dropping their €40m asking price and Everton moving up from their initial €25m offer.

The pair are now happy to do a deal at €30m plus bonuses, something Il Mattino and Tuttosport back up, with the latter explicitly stating that an offer of €30m has been accepted.

The two clubs have to finalise the nature of the bonuses involved, however. 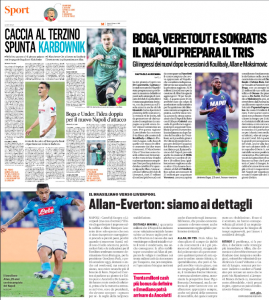 Corriere say that Napoli want those clauses to be ‘humanly attainable or at least inviting’, suggesting that they won’t take any ridiculous offers from Everton in that regard.

The key part of the negotiations proved to be Allan promising himself to Everton as that helped to remove ‘any hypothesis of an auction’ and gave the Blues a clear run to finalise negotiations without the threat of a rival bidder.

A bigger problem is what Allan will do in the coming days. He’s set to report for preseason with Napoli but would prefer to avoid this and head straight to Merseyside.

That can’t happen until a deal is in place, giving the two clubs extra motivation to find an agreement on the bonuses that currently separate them, and bring this long-running saga to a close.