Home Europe Surprise for Huddersfield Town star as newspaper names him ‘Player of the...
SHARE

Having made his debut for Denmark in 2008, Huddersfield Town’s Mathias Jorgensen only became a key figure for his national team in the past few months.

Since 2016, he was forced to settle for a place on the bench, but things changed when he impressed against France at the World Cup in Russia.

Since then, Age Hareide has started the defender in each and every competitive fixture and he’s been a standout player for them.

Danish newspaper Ekstra Bladet have reviewed every player’s performance in 2018 and have come to a conclusion that David Wagner’s defender is Denmark’s ‘Player of the Year’.

Out of the last seven matches he has played, the country has kept five clean sheets and conceded two goals.

The 28-year-old has been a key figure in his national team’s back four that has been rock solid in the second half of this calendar year.

Ekstra Bladet also has comments from the player himself, who revealed that even he was surprised to see 2018 with Denmark end in this fashion.

“At the beginning of the year, I did not imagine in my wildest imagination that the year would end [this way]…,” he added. 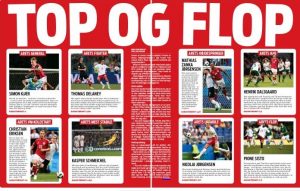 Wagner would be hoping that Jorgensen continues his fine form for Denmark with Huddersfield, but he will not be able to call upon the centre-back for the clash against Wolves as he is suspended for the weekend’s league fixture.