On Tuesday, Marca brought us a rather exaggerated update regarding Christian Eriksen and his future at Tottenham, claiming Real Madrid could sign him ‘tomorrow’ if they wanted to as long as Zinedine Zidane gave the green light.

That hasn’t happened, however, and the Denmark international is still managed by Mauricio Pochettino in London, who has no idea whether his star will still be at the club come the weekend.

In the meantime, Paris Saint-Germain in France and their director of football are said to have turned to their attention to Eriksen, according to Le Parisien, as they are looking to replace the creativity they are expected to lose from Neymar’s potential return to Barcelona.

Paulo Dybala is also an option for them, but the Tottenham midfielder has a long-time admirer in the French capital in Leonardo, who was already interested in him back in 2013 prior to his move to London from Ajax. 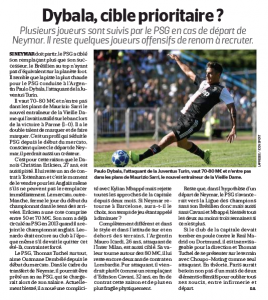 It’s said ‘now is the time for Spurs to sell’, seeing as Eriksen only has less than a year on his contract, and with a price of €50-70m, he wouldn’t be out of reach for the Parisians, who are expected to get a decent chunk of money from Neymar’s sale.

First, however, the Brazilian needs to go, which, while well underway, isn’t a guarantee just yet.