Home Europe ‘Difficult’ for club to part ways with player amid Watford and Fulham...
SHARE

On Wednesday, we covered an article from Calciomercato, who claimed that both Watford and Fulham were interested in the services of Milan’s Mateo Musacchio.

The Argentinian defender has featured more than first anticipated this season following the injury to Mattia Caldara, and he’s been important in his club’s recent good run of form.

That’s why we had our reservations about both the Hornets’ and the Cottagers’ chances of signing the 28-year-old, and if Corriere dello Sport are to be believed, we were right.

Picking up the story, which they say comes from England (it doesn’t),  they explain that due to the current situation at Milan, it would be ‘difficult’ for the Serie A club to part ways with him, as they want to keep their squad as unified as possible, especially at the back. 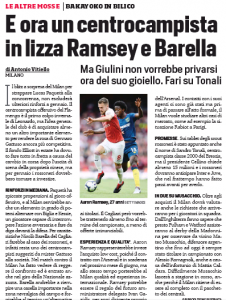 Fulham were said to have tried to sign Musacchio in the summer, but had already failed in their attempt.

If that was the case then (he’d only made 15 league appearances in 2017-18), now that he’s actually an important member of their squad, it just isn’t going to happen.

As for Watford, they normally have their ways, and the Pozzo connection, but even that seems like a long shot.