Despite signing Sokratis from Borussia Dortmund last summer and having Laurent Koscielny return from injury, Arsenal’s defensive frailties remained on display throughout the current campaign.

Unai Emery’s best efforts to shore the Gunners at the back have proved somewhat futile, and more reinforcements will be needed in the summer if they want to once again compete for a top four spot next season.

According to Corriere dello Sport, Shkodran Mustafi is a likely casualty in this endeavour, as his performances have been well below what is expected of him, and ‘among his manager’s favourites’ to replace him is Kostas Manolas.

Reports emerged on Wednesday of Arsenal not wanting to pay his already affordable €36m release clause in full, although the Italian newspaper don’t mention of this in their article, simply stating the Gunners will face strong competition from the Premier League for the Greek defender. 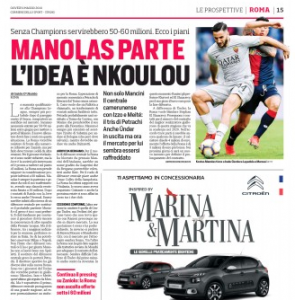 However, and this is the important bit, Manolas would much rather stay in Italy if he can, where Napoli and Milan could swoop in if the opportunity arises, joining Juventus in local suitors.

All in all, it seems the Roma defender might not be heading for the Premier League anytime soon.

Chelsea scout on weekend mission for specific player – He’s the...