On Wednesday, Portuguese newspaper Record came up with some surprising claims saying that Real Madrid had joined the race for Liverpool youngster Rafael Camacho.

The outlet didn’t have many details about the Galaticos’ interest in the player, and only said the Spanish club would ‘attack’ the 18-year-old.

Now it turns out that newspaper A Bola comes up with a similar story, this time saying Camacho’s father has met Real Madrid.

It’s claimed that his dad, who’s also his agent, was in the Spanish capital on Tuesday to hear about the club’s interest in his son. 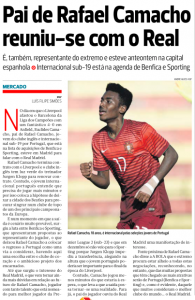 A Bola says that Jurgen Klopp has already given the green light for Liverpool to renew Camacho’s contract, but the player wants more minutes, and could find it somewhere else.

At Real Madrid? That seems unlikely. Although they could sign him and then arrange a loan move.

Benfica and Sporting are said to be still battling for the player as well, but now, they know they have competition from one of the biggest clubs in the world.

Every single story from Portugal on this case recalls that back in January, Sporting almost got Camacho on loan. However, the move was blocked by Klopp, who promised the youngster more minutes.

With the promise not being fulfilled, we wonder if the player will give Liverpool another chance.