Italian newspaper Tuttosport has a piece covering the future of Atalanta’s goalkeepers.

With Pierluigi Gollini linked to a departure from the Serie A side, the outlet wonders if the other options in the squad are good enough to take his position.

One of the clubs who’ve been linked to the 25-year-old is Tottenham Hotspur, and Tuttosport has a little to say about that.

Their story covers the Spurs’ interest, as well as rumours linking him to Roma, since he could replace Pau Lopez at the Giallorossi. 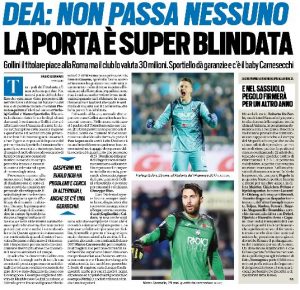 But Atalanta are prepared for these attempts, and will work hard to keep him. Tuttosport says the club will demand between €25m and €30m for his transfer.

They’re ready to be tough with Tottenham and others in negotiations, which would provide an opportunity for Daniel Levy to do his thing.

Gollini has a contract with the Italian side until 2023, so there’s no rush to get a renewal for him.

The goalkeeper has a past in English football, since he’s been part of Manchester United’s academy and also played for Aston Villa before moving to Atalanta.