Leeds United acquired the services of Elia Caprile in the winter market as the goalkeeper arrived at Elland Road from Chievo.

Prior to signing the Italian, the Whites were keen on taking Vålerenga’s custodian, Kristoffer Klaesson.

The 19-year-old came up through the ranks of Vålerenga’s youth system and is now the first-choice keeper at the club.

Klaesson signed an extension with his current employer in April and his contract will keep him at the Oslo based side until 2022.

Speaking to the same newspaper, the young goalkeeper expressed his delight after Marcelo Bielsa’s side showed interest in signing him. He didn’t provide an explanation for why a deal never took shape.

“It’s nice that there was interest from Leeds. After all, it’s a big club in England. Of course, it is great that such a club came along, and many players probably have a dream of playing in England,” he said.

“But now I have contract with Vålerenga for two more years. The goal is, first of all, to become as good as I can.

“VIF has always been my club ever since I was four or five years old. I think it’s good for me to get experience in Norwegian football now. There is much to build on here at VIF. Then the dream is to play in one of the five biggest leagues in the world, like most of them.”

Vålerenga sporting director Jørgen Ingebrigtsen has also confirmed talks with Leeds for Klaesson. However, a deal couldn’t be concluded because of the stance taken by his side.

“Leeds made a specific inquiry about what our plans were with Kristoffer. The first conversations with them were in autumn last year,” Ingebrigtsen explained. 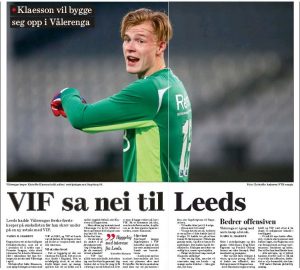 “We said what you see now. That this is a player we didn’t want to sell. We had faith that he could become the first [choice] keeper at Vålerenga fairly quickly, and he is at the moment. They had a sense of understanding. The talks with them were very good.”