Not a day goes by in France at the moment without a story being written about Steve Mandanda’s possible return to Marseille.

The Crystal Palace goalkeeper isn’t having the best of time at Selhurst Park, frozen out of the team by Sam Allardyce following a lengthy knee injury, with the likes of Wayne Hennessey and Julian Speroni ahead of him in the pecking order.

Rumours of pre-agreements having already been signed started circulating, which Mandanda put to bed nearly immediately, yet articles about discussions between the parties are still incredibly popular.

The latest comes from Le10 Sport, who claim that Mandanda recently met with Marseille’s director of football, Antoni Zubizarreta, to discuss a potential return, which would make it meeting number two between them, following L’Equipe’s claims in January.

Furthermore, the French magazine report a 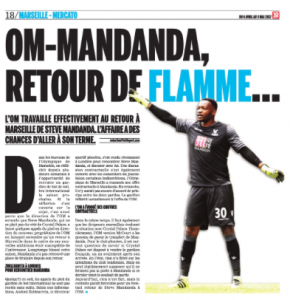 contractual offer has been made by the Ligue 1 side, but nothing has been signed.

The big problem remains Crystal Palace, with no indication the Eagles are ready to sell their star in the summer, even with Allardyce’s lack of faith in the player.

This one isn’t going away any time soon.