Liverpool fans are probably best getting used to snipes from the Catalan media, and perhaps they already are.

Throughout Philippe Coutinho’s transfer saga, the Catalan media were dismissive of Liverpool.

The Premier Legaue team were arrogantly dismissed as a selling club, which didn’t work out too well, and when it became clear Liverpool would play tough with Barcelona, the Catalan press turned bizarre.

Just before Liverpool announced their Naby Keita deal, Mundo Deportivo suggested Barcelona could sign the player, as if to teach Jurgen Klopp and co a lesson.

Mundo Deportivo again talking up Naby Keita as a Coutinho alternative. Still unsure whether this is just to wind up Liverpool. #LFC #FCBlive pic.twitter.com/WTrsSDsV5D

Then the same happened with Thomas Lemar.

Catalan newspaper Sport openly admitted that one of the reasons Lemar would be a good target for Barcelona is that it’d annoy Liverpool.

Toys were thrown from Catalan prams and the whole thing, rather than being an irritant to Liverpool, became embarrassing for Barcelona.

Sport then put together a live blog of the Coutinho situation on August 31st, explaining a ‘funeral’ like atmosphere.

They’ve reiterated the same claim in their Monday newspaper. In a lengthy article on ‘The 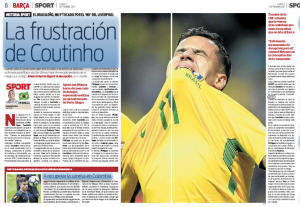 frustration of Coutinho’, Sport say that after the Brazil v Ecuador match, there was a ‘funeral atmosphere’.

Coutinho was ‘crestfallen as never before’ and now faces taking a ‘flight he never wanted’ back to Liverpool.

It’s really being piled on. Hopefully the Catalan strop continues throughout the season, because it’s quite entertaining.