Manchester United defender Eric Bailly continues to be linked with a transfer to AC Milan by the Italian media.

On Tuesday, we saw the 25-year-old getting named in a story from Tuttosport, but there weren’t any details about the chase.

But Tuttosport are back at it today, this time claiming that the Red Devils aren’t going to make his departure very easy.

The newspaper claims that even though Bailly hasn’t been getting a lot of playing time under manager Ole Gunnar Solskjaer, Manchester United don’t want to get rid of him ‘lightly’. 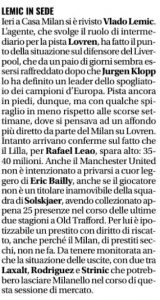 It’s claimed that a loan with an option to buy is ‘conceivable’, and that’s actually good news for Milan, since the Rossoneri are not interested in getting players on spells with no chance to make the deals permanent.

But Bailly is just one defensive player among the many listed by Tuttosport, so it looks like a negotiation for him wouldn’t get to an advanced stage soon.