Jean-Michel Seri, repeatedly linked with Arsenal and Liverpool this summer, was all set to become a Barcelona player around a week ago, and then the midfielder’s dream move fell to pieces.

Around Europe various reasons were given. In Spain it was stated that Barcelona had second thoughts, and doubts about the player had been reinforced by a Champions League performance.

The version Seri prefers to believe is that the move failed for financial reasons, with his current club Nice pricing the transfer too high. Still wanting a transfer, the midfielder has been speaking to Catalan newspaper Mundo Deportivo, and gave encouraging words to several clubs including Arsenal and Liverpool.

On reigniting the Barcelona transfer Seri said: “I want to be optimistic and think that there are still options. Let the two clubs talk quietly again and come to an agreement. We are not talking about any club, where you are going to sign for money. I want to sign for 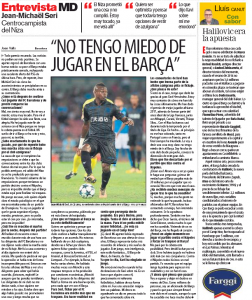 Seri was one of the best midfielders in France’s Ligue 1 last season, and had an agreement he could leave Nice for €40m. There’s been claims and counterclaims about that clause now expiring or not, but it’s clear Seri feels Nice are making an exit too difficult.

He wants Barcelona, but Arsenal or Liverpool would clearly do.

A come and get me plea, with days of the window to go.