Miralem Pjanic has ‘one foot’ out of Juventus, according to Turin newspaper Tuttosport this Monday.

With the midfielder’s agent Fali Ramadani offering him around, the 28-year-old is gathering a list of interested sides, which would now include Barcelona, Chelsea, Manchester City and Paris Saint Germain.

Tuttosport makes it clear that the list doesn’t have a specific order, which means there’s no clear lead for any of these clubs for now. The side linked most over the past week is easily Manchester City, despite denials coming from the club.

According to the story, Juventus don’t want Pjanic to go, but wouldn’t make big efforts in case he shows his desire to leave the club. 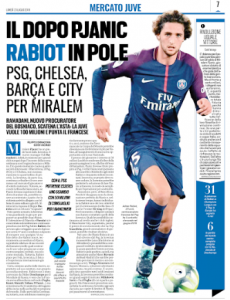 However, the price tag isn’t small. Tuttosport says that Juve want at least €100m for his transfer, and any offer below that number will be responded with a ‘no thanks’.

With Pjanic’s exit looking likely, the Old Lady are already looking for a possible replacement, with PSG’s Adrien Rabiot being the priority for now.

Maybe if the clubs find a swap deal, then the French side would have an advantage over Barça, Chelsea or Man City.

Turin’s media have been insisting on Pep Guardiola interest repeatedly and Chelsea are dragged into almost every big Italian exit rumour.