Aksam report Besiktas will find it very difficult to sign Shinji Kagawa from Borussia Dortmund because of interest of West Ham United and Everton for the Japan international.

The Turkish newspaper claim both West Ham and Everton are tracking Kagawa ahead of the summer window as they look to beat Besiktas to his signature.

Kagawa is currently on loan with the Super Lig side and the former Manchester United man has impressed during his time in Turkey. Besiktas are considering signing him on a permanent deal but face competition.

According to Aksam, the Turkish side could struggle to make his move outright due to Everton and West Ham making approaches for the player.

It’s claimed the two Premier League clubs have made offers to Dortmund and they will try again at the end of the season. 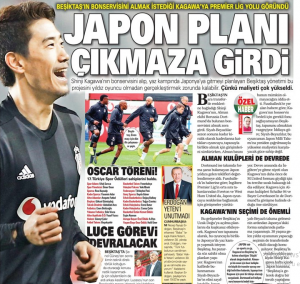 Kagawa has made 8 appearances for Besiktas in the Super Lig this season and scored 3 goals. He is under contract at Dortmund until June 2020.

He didn’t impress at Manchester United and then struggled when he returned to Dortmund, so Kagawa would be fortunate to have such interest.