This summer could very well be one of the busiest in recent times, and Inter Milan, who are trying to get Luciano Spalletti in as their new manager, are expected to be one of the major players in it.

However, before they can start buying, they need to sell to meet FFP regulations, and the easiest way for them to do that is to sell Ivan Perisic, with Manchester United the favourites to help them out with that.

Reports of talks between the two clubs grew last week, with a price still to be agreed, but with Inter Milan needing the money before the 30th of June, it could be done in the coming days.

This is, at least, what Gazzetta dello Sport are reporting on Thursday, claiming that Inter would like to 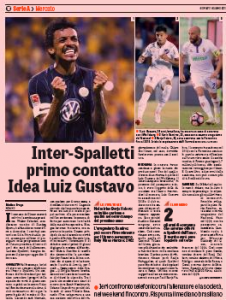 get the transfer done with Manchester United in the first 10 days of June.

With Manchester United wanting to pay somewhere around €40m for Perisic, and Inter Milan requesting a little bit more than that, if the Serie A club want to be on schedule with their summer plans, a compromise is going to be needed soon.

Of course, things don’t always go to plan, especially in the transfer window.