Gazzetta dello Sport, on the other hand, are not, splashing a big page about Fiorentina and their current transfer window, in which they drag West Ham’s Felipe Anderson.

The Brazilian, who fell out of favour at London Stadium under David Moyes, was sent to FC Porto for the season in order to get some football under his belt, but that has backfired.

The 27-year-old has only featured twice in the league so far, with both appearances coming from the bench, and there has been active talk about him cutting the deal short in order to find another club. 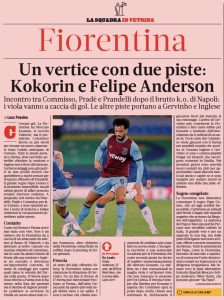 While Fiorentina dream of attracting Papu Gómez from Atalanta, they know that remains a very difficult ask, which is why there are alternatives, and Gazzetta claim those are the aforementioned Felipe Anderson and Aleksandr Kokorin from Lokomotiv Moscow.

The Serie A side are in desperate need of goals, and adding someone like the Brazilian who, when in form, can both score and create them, makes sense.

It shouldn’t be too hard to sell him a return to Italy either, nor would it be difficult to sell the pitch to West Ham, who appear to have given up on him.