The outlet explains the Lions president Frederico Varandas is planning to close some deals before Christmas, having signings ready to play as soon as possible in 2019.

Two of these possible arrivals would come from Leicester City: Adrien Silva and Islam Slimani, both sold by the Lions to the Foxes in the past couple of years.

Although Adrien’s case has been getting a lot of attention from the Portuguese media this week, this time the only thing Record says is that Sporting are ‘running against the clock’ to get him as soon as possible, mostly because of the injuries the club’s midfielders have been suffering. 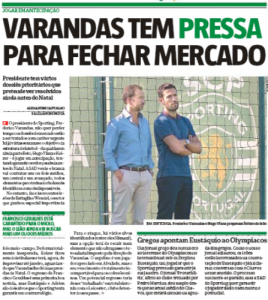 On Slimani’s case, Record sounds more cautious, saying that the player’s wages must be agreed with Leicester City first, as Sporting don’t have the conditions to afford 100%.

Although the Foxes would certainly have to keep paying a part of their salaries, this sounds like a quick solution to get rid of two players who haven’t been used, and apparently, make them both happy to reencounter their old club as well.

And even though Record doesn’t mention it, Slimani is obviously on loan at Fenerbahce until the end of the season. Sporting’s interest is completely based on the recent rumours which said the Turkish side are looking to send him back to the Foxes in January.