Home Premier League Everton Club said to be in talks with Everton to sign player, would...
SHARE

According to Turkish newspaper Takvim, Fenerbahce are in talks with Everton over signing Yerry Mina.

Mina was strongly linked with a move to Fenerbahce last summer but after an impressive World Cup he ended up at Everton.

However, since his arrival at Goodison Park the Colombian international has struggled with injuries and subsequently he’s been linked with a move away from the Merseyside club just a year after his €30m switch from Barcelona.

Takvim reports Fenerbahce are still interested in Mina and are looking to make a loan offer to Everton for the 24 year old.

The Turkish side are looking to sign at least one centre back this summer and Takvim say bringing in Mina could be the solution for the Yellow Canaries. 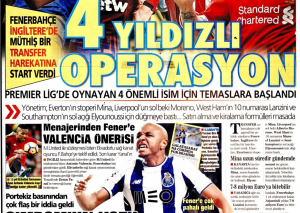 Former Liverpool defender Martin Skrtel is set to leave the Super Lig club when his contract expires next month, and Mina will be seen as an ideal replacement.

Mina featured 15 times for Marco Silva’s side last season, scoring one goal. He is under contract at Everton until June 2023.

It would be a surprise to let Mina go just a year after signing him, even on loan.