After many claims from the Italian press, Thursday saw the BBC confirm what many already believed: Aaron Ramsey’s next club looks like it will be Juventus.

The Arsenal midfielder, whose contract is up at the end of the season, is still studying other possibilities, but the general consensus is that barring an amazing U-turn, he’ll be moving abroad, and most likely to Italy.

Juventus, who remain confident of getting their man, however, would ideally like Ramsey in their squad as early as January, which won’t happen unless they present the Gunners with €20m.

Since that’s far too expensive for the last six months of the midfielder’s contract, Gazzetta dello Sport on Friday explain the Serie A champions are ‘studying alternatives’. 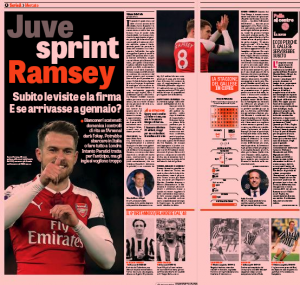 One of said options would be to include Mehdi Benatia, who wants to play more, in the deal, although that wouldn’t be Max Allegri’s first choice, as he considers the Morocco international his third choice centre-back behind Leonardo Bonucci and Giorgio Chiellini.

Furthermore, Juventus aren’t thrilled on the idea of letting anyone go in January, especially a defender following Andrea Barzagli’s injury.

The rest of the article talks about Ramsey’s reported medical on Sunday, but that first emerged in England, and Gazzetta make that clear.

They speculate the tests could take place in one of three places: Turin, Milan or London.