Home Europe Club have Celtic ‘colossus’ in their sights – ‘Could be facilitated’ by...
SHARE

As you’ll be sorely aware by now due to the numerous stories over the past six months, Milan have had an interest in Kristoffer Ajer.

Since that appeared, they’ve played against Celtic twice in the Europa League, giving them a chance to have a closer look at the Norwegian.

They then decided Mohamed Simakan was the centre-back for them, and worked hard to get a deal with Strasbourg over the line to get it sorted.

However, a recent injury to the Frenchman has scuppered that deal, making them look at alternatives.

A bunch of names are mentioned by Corriere dello Sport in their Wednesday edition, ranging from Fikayo Tomori to Ozan Kabak.

There is also a mention of Kristoffer Ajer, as it’s explained they ‘still’ have the Celtic ‘colossus’ in their sights, and while he isn’t top of the list, they have a trump card if they want to make the move happen. 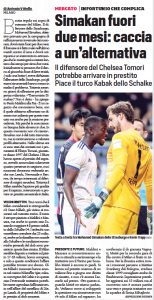 It’s stated the negotiation ‘could be facilitated by the inclusion in the deal of Diego Laxalt’, whom they sent on loan to Parkhead in the summer.

Since his arrival, the left-back has started nine out of 11 league games under Neil Lennon, providing versatility down that side of the pitch either in defence or in midfield.

There is no option to buy in the deal, meaning negotiations would have to start afresh, but if Milan want Ajer and Celtic want Laxalt, there’s potential for something there.