The outlet highlights how quickly things have been moving in the past week, since it only took days between the player’s statements that he’d like to sign for the club to the time he admitted he was in contact with president Juan Roman Riquelme.

Olé now writes that Boca Juniors are set to advance ‘with everything’ this week so they can have Torreira signed by June.

“Torreira only spoke with Román, but they still did not talk about coming to Boca … That part will come this week, when they talk again”, a source told Olé.

Currently loaned to Atletico Madrid, the 25-year-old is expected to be back with the Gunners at the end of the season. 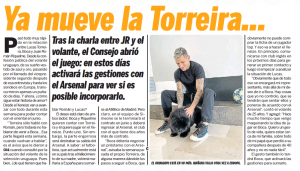 The newspaper says there’s a ‘clear’ desire from both Boca Juniors and Torreira for the move to happen.

The difficulty, of course, is to work out a deal with Arsenal.

The Argentine side are set to communicate with the Gunners ‘in the coming days’ to kick off the talks, and should initially work on a loan move.

The outcome of this story should now only depend on the London side, since Torreira is that keen.