A shining light in an underperforming team, Dusan Vlahovic is the talk of the town in Italy these days.

The Fiorentina striker, with his 13 league goals in the league, has shown why so many clubs are after him, and the 21-year-old’s future, despite having a contract tying him to the Serie A club until 2023, is up in the air.

The aim in Florence is to tie him down further with an improved deal, but with the likes of Tottenham and Arsenal now joining the race to sign him, things are getting more and more complicated.

The pair are just two of many sides, with Milan, AS Roma, Borussia Dortmund, RB Leipzig and Atlético Madrid also mentioned, reported by Corriere Fiorentino as ‘having recently tested the waters with his agent’.

This growing list of suitors means keeping him at the club ‘will not be easy’ for owner Rocco Commisso, and we all know how badly Spurs and the Gunners need a striker. 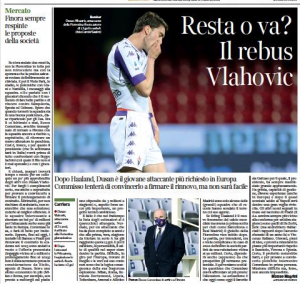 With the future of Carlos Vinícius uncertain at Tottenham, someone to rotate with Harry Kane would go a long way next season, and José Mourinho seems to have turned to Vlahovic.

As for the Gunners, it remains to be seen what comes of Alexandre Lacazette, although Mikel Arteta seems to be a bit fonder of him of late.

Regardless, if Fiorentina were to let him leave, ‘they would start at a valuation close to €50m’.

A tall order, and one perhaps too large for the likes of Spurs and Arsenal this summer.