With Achraf Hakimi seemingly on his way to Paris Saint-Germain despite Chelsea’s last minute attempts to scupper a deal, Inter are going to need a right-back.

Simone Inzaghi seems OK with the idea of losing the Moroccan as long as he can get someone in he trusts, which is where Arsenal’s Hector Bellerin comes in, according to Gazzetta dello Sport.

The Spaniard could be on his way out of the Emirates this summer, and appears on a three-man shortlist the club are looking at to replace Hakimi.

As well as Bellerin, Manuel Lazzari and Chelsea’s Davide Zappacosta are being looked at. 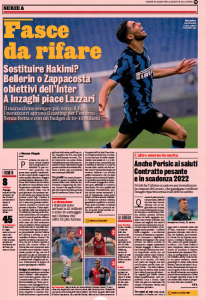 It’s explained that the financial crisis caused by the Covid-19 pandemic has touched even ‘noble clubs’ such as Arsenal, who ‘need to sell’ this summer.

Bellerin is seen as an ‘old favourite’ of Inter’s, targeted back in the days when Luciano Spalletti, now at Napoli, was in charge.

The Spaniard’s age and quality would justify an investment, ‘providing it’s within the club’s parameters’, meaning they won’t overspend.

That’s because of the €65m they are expecting to make from the Hakimi sale, only a ‘maximum of €15m’ will be reinvested into the position.

Will Arsenal sell Bellerin for that? It seems very unlikely.