Luis Suarez’s contract at Barcelona runs down in 2021 and he’s managed to score only two goals in the last 10 matches played in all competitions.

In the Champions League, the striker has failed to score in the last 16 away matches and Friday’s edition of Spanish newspaper AS claims the debate is ‘thick’ at the Camp Nou on the topic of finding a replacement for him.

Ernesto Valverde’s side are convinced the Uruguayan can play at the top for one more year, but ups and downs could make it convenient for the La Liga winners to bring in a player in the summer who can assure goals and have time to adapt at the club.

Tottenham Hotspur star Harry Kane and Manchester United strikers Romelu Lukaku and Marcus Rashford are discarded, while one of the players on Barca’s agenda is Roberto Firmino of Liverpool.

Regarding the Reds forward, AS claims the Brazilian knows the tactics of his position and also during transition player. In addition to this, Firmino is quick and smart, but an approach for him won’t be easy, especially because his contract at Anfield runs until 2023. 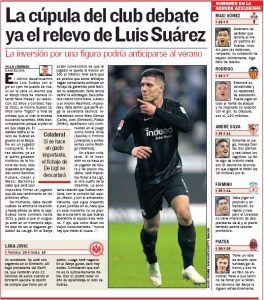 It’s stated Liverpool have no intention to sell Firmino and even if they were to consider, the transfer fee could be ‘prohibitive’.