It’s been a while since the Italian press started saying Serie A sides were interested in bringing Emerson Palmieri back to the country.

Now considering that Frank Lampard hasn’t used the 25-year-old at Chelsea lately, that’s a big boost for the rumours for a summer transfer.

Newspaper Tuttosport has a story today saying it’s Juventus who’d like to sign him, as they look for a backup option for Alex Sandro.

The outlet describes how Palmieri has been snubbed by Frank Lampard recently, and claims that in case it continues until the end of the season, then the left-back is likely to leave the club, despite the two years remaining on his contract. 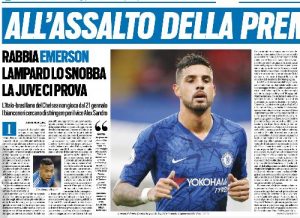 It’s said that even though Palmieri’s agent isn’t mentioning any proposal the player has, he’s actually been approached by Juventus, and is living some expectation about the offers he’s getting in the summer market.

Tuttosport doesn’t say how much Juve would have to pay for the transfer, but claims that his salary of £42k a week at Chelsea would be a ‘joke’ for the Old Lady.