As Nuno Tavares seems to be on the verge of leaving Benfica this summer, the Portuguese media can’t stop naming Southampton as one of the clubs who are interested in his signing. It’s happened a few times this week and is repeated by A Bola today.

The newspaper features a story claiming the Eagles ‘decided’ that the fullback is being sold, and despite the negotiations with Napoli, there are clubs in England who want him as well.

The list is the same as reported a few times, as it includes Brighton & Hove Albion, Newcastle United and Southampton. And once again, the Saints are named as the club who ‘even already contacted Benfica’.

Negotiations with Napoli seem to be advanced, but with no financial agreement yet. A Bola writes that the Eagles want €15m for the transfer, and according to claims from Italy, the Serie A side don’t want to spend over €12m. 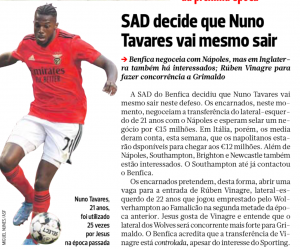 Since the claims regarding Southampton’s contact have been around for over a month, it’s not clear if Saints are still interested in the signing, or if they backed off once they got to know Tavares’ price.

With Napoli clearly leading the race, perhaps the Premier League sides are being used as an argument for the Italian side to up their bid soon. That we shall see in the coming weeks.